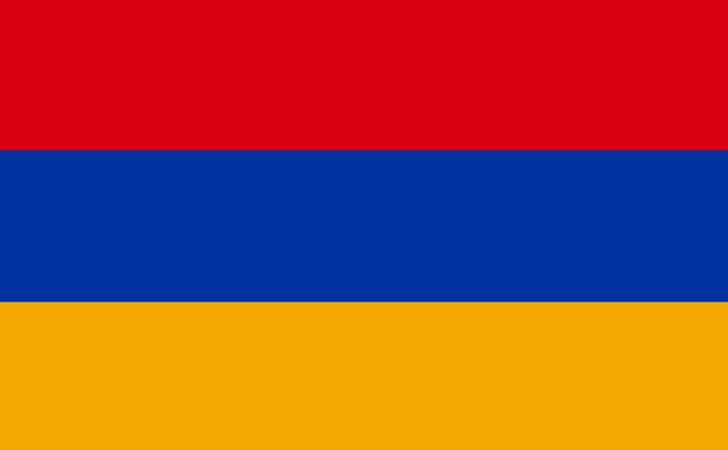 The national flag of Armenia features Tricolour that comprises of three horizontal bands of equal width, red on the top, blue in the middle, and orange on the bottom. Armenia Flag adopted the current flag design on 24 August 1990. On 15 June 2006, National Assembly of Armenia passed and approved the design.

Throughout the long historical journey, there have been many disparities of the Armenian flag. Flag of Armenia were represented by dissimilar symbolic animals shown on their flags. Today's tricolor flag stands little similarity to the earliest Armenian 'flags'. However, the flag of Armenia has very long history that kept altering the flag with passing regimes.

On November 29, 1920 Bolsheviks recognized a new flag by the First Congress of Soviets of the Armenian SSR. On December 30, 1922 the Transcaucasian SFSR had a hammer and sickle inserted into a star with initials. In 1936, the TSFSR was broken up into its three constituent regions, which were the Georgian SSR, the Armenian SSR, and the Azerbaijan SSR.

In late May 1988, amid rising nationalist tensions the communist party leader banned tricolor. This came to an end on August 24, 1990, when Supreme Soviet declared the republic's sovereignty and renamed the country the Republic of Armenia. The flag is itself has a long story of its establishment.

The meanings of the tricolors are interpreted in many various ways. Like, the red stand for the blood that was shed during the Armenian Genocide, blue is for the Armenian pure sky, and orange depicts the country's courage. It was estimated that near about 1.3 million people were killed in the war.

The Armenian flag designed has been changed by the passing ruler. However, none of the regime was able to change the whole design of the flag ever. But, after 1990, the Supreme Soviet adopted the flag and considered it final flag’s design for Armenia.

Lying in the Asian continent, it is a landlocked nation in the Transcaucasia region, between the Black and Caspian Seas. The nation is bordered on the south, west by Iran, Turkey on the north, east by Georgia, and Azerbaijan with approximately 29.3 lacs inhabitants. Armenia has population density of 101 people per square kilometer (263/square mile). Further, Armenia is known to be the second-most densely populated of the former Soviet republics.