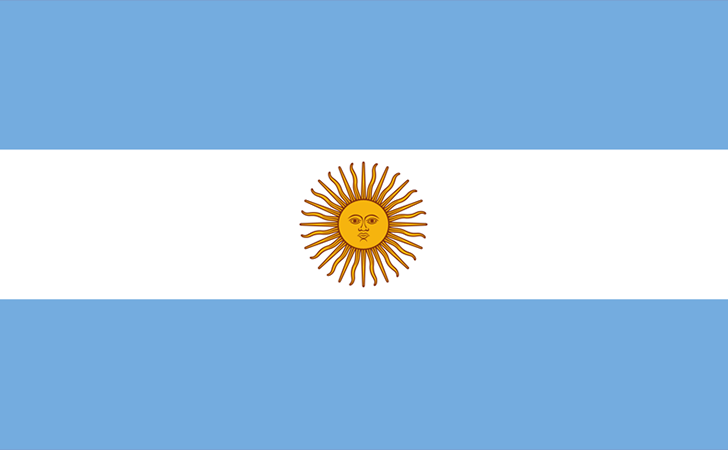 The Argentine Flag was assumed to have occurred during the Liberation demonstration in 1810. The flag of Argentina claims what looks to be a pretty humble design. However, this design has much imagery and significance behind it. The national flag of Argentine comprises of a triband in blue and white. The blue and white colors were selected by Manual Belgrano, the revolutionary leader fought against Spain. These colors symbolize the blue sky opening up to divulge white cloud.

Manuel Belgrano is the creator of Argentina’s flag Buenos Aires City Flag. He created it during the Argentine War of Independence. However, on July 20, 1816 the flag was finally declared as the national flag by the Congress of Tucumán, shortly after the declaration of independence. On February 25, 1818, the Congress featured the Sun of May in the war flag. The design of sun was copied from Argentine’s coin featured in 1813.

Currently, the flag is used as a provincial flag by Mendoza province. On June 8, 1938, national law no. 12,361 sanctioned June 20 "Flag Day", a national holiday. In 1978 it was specified that Official Ceremony Flag should be of 1.4 meters wide and 0.9 meters high. In 1985 the Law 23,208 repealed the article 3 of the Decree 10,302/1944, stating that Federal and Provincial Governments and citizens have the right to use the Official Flag of the Nation.

After the May Revolution, the creation of a new flag became priority in the nation. Therefore, on 1978, the flag's official proportions were defined 9:14, and its official size is 0.9 by 1.4 meters. It landscapes three stripes blinking sky blue, white and sky blue.

Argentina is located in the southern half of South America. Its boundaries are surrounded with Chile to the west; the South Atlantic Ocean to the east, Bolivia and Paraguay to the north, Brazil to the northeast, Uruguay to the south with approximately 4.43 crores population. Argentina is the 8th largest country in the world and ranks 4th largest in the Americas. Furthermore, it has the largest Spanish-speaking people in the nation. With the population density reported at 16.02 sq. Km in 2016.