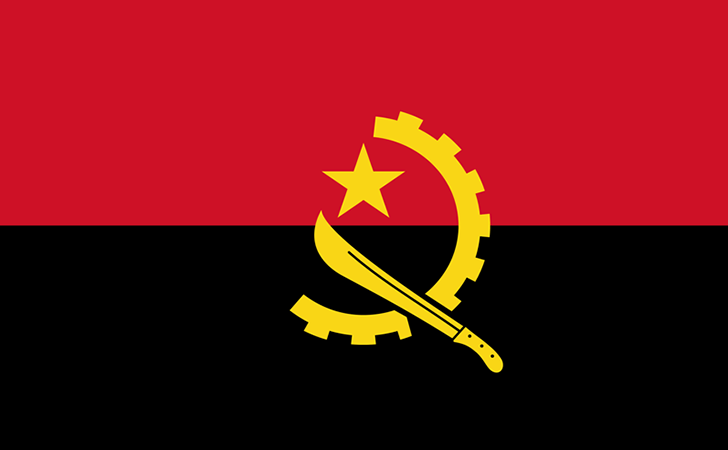 The colors in Angola Flag are designed to exemplify the largest continent ‘Africa’, and the blood shed as the country fought for its freedom. The flag features a gear character, which is the representation of nation’s industrial workforces. The machete symbol signifies peasantry, and the star initiate on the flag symbolizes of socialism.

Angolan flag as outlined in the Constitution of Angola, the red half of the flag means bloodshed during Angola's sovereignty struggle, and the black half defines the continent.

The flag is described in article 162 according to the Constitutional Law of the Republic of Angola on August 25, 1992. The machete emblem, gear, and star positioned in the center of the flag in yellow color. The flag is based on the Popular Movement for the Liberation of Angola (MPLA), which clashed Portuguese colonial rule in Angolan Civil War.

In 1975, the flag of Angola was adopted with the design embarked on it with the design of Popular Movement for the Liberation of Angola. The flag has been fortunate to remain same as its original design till date.

Republic flag of Angola has two straight bands of red and black with the Machete and Gear Emblem in gold. The midpoint comprised of a five pointed-star within a half gear wheel traversed by a machete. In the central emblem, the gear depicts industrial workers, the machete portrays peasantry, and the star is shaped star symbolized socialism.

Nation Angola is located in the southern region of Central Africa. Recognized as the Republic of Angola, the nation lies along the coast of the Atlantic Ocean. It is surrounded with three sides by land and one side by ocean. The country shares borders with Zambia, Namibia, and the Congo. Angola has the total population of 31,289,040 people. The population density value comes to about 65 people per square mile of land.

Since the implementation of a new constitution in 2010, the framework of a presidential republic, whereby the President of Angola is both head of state and head of government, and of a multi-party system. From 2002 to 2010, executive branch of the government was poised of the President, the Prime Minister and Council of Ministers. The legal system was based on Portuguese and customary law, a Supreme Court served as the appellate tribunal; a Constitutional Court with powers of judicial review and statutory authorization.