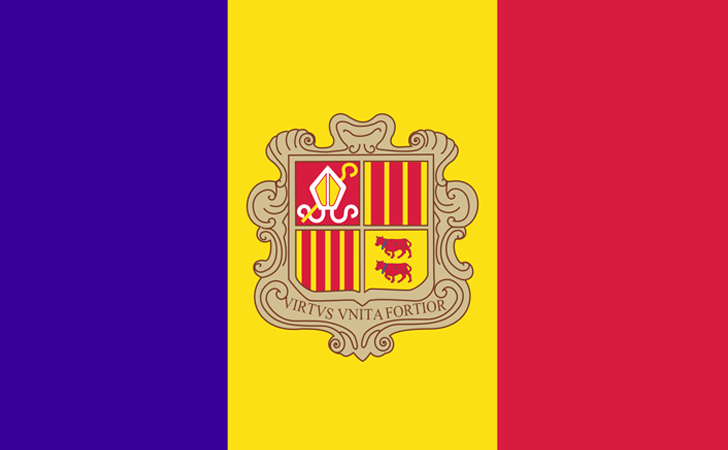 To describe about Andorra Flag, it comprises of three equal vertical bands of blue, yellow, and red with the national coat of arms fixed in the yellow band. Those colors are supposed to embody Andorra’s freedom from both France and Spain, as blue and red were occupied from France, while red and yellow were taken from Spain. It is also described as a crown with horizontal stripes.

The Flag of Andorra depicts furiousness required to protect dignity of the country, blue is for ocean of thoughtfulness, and yellow and red represents 700 years of dependency on the captured rulers. The motto at the bottom of flag’s shield mentions that “Strength United is Stronger."

The national flag of Andorra was embraced in 1866. The flag is a perpendicular tricolor of blue, yellow, and red with the coat of arms of Andorra in the center. Though the three vertical bars at first seem to be of equal width; however, the center yellow bar is somewhat wider than the other two. To measure in equal ratio of bar widths is 8:9:8.

Andorra’s flag has three bars represent quite similarity of the French Tricolor. Further, the pattern of a wider middle stripe resembles the Spanish flag. From 1806 to 1866, Andorra's flag was an upright bi-color of yellow and red having the motto in the coat of arms in the middle stripe. Interestingly, the design is similar to the flags of Romania, Moldova, and Chad with different width size.

In an agreement during 1278 between the bishop of Urgel and the count of Foix incorporated their symbols. Following the decision, the mitre and crosier of the bishop looked next to the three red bars on yellow. This constituted the arms of the count with the motto. Further, two red cows of Béarn and France; and the yellow shield with four red bars of Catalonia and Spain completed the design. Below is the Latin motto carving of this coat of arms appearing on the outside wall of the national parliament building. Although, the national flag is said to date from 1866, but the design was standardized in July 1993 when Andorra joined the United Nations.

Andorra is situated in the European continent in the high mountains of the Pyrenees between France and Spain. Andorra is a landlocked between the boundaries of France and Spain with approximately 77, 072 thousands inhabitants, with the population density of 164 per Km2 (425 people per mi2). The politics of Andorra consist of a parliamentary constitutional diarchy, and a multi-party system. The government exercises the executive power with the Head of Government of Andorra as chief Executive and Legislative power is bestowed in both the government and parliament.