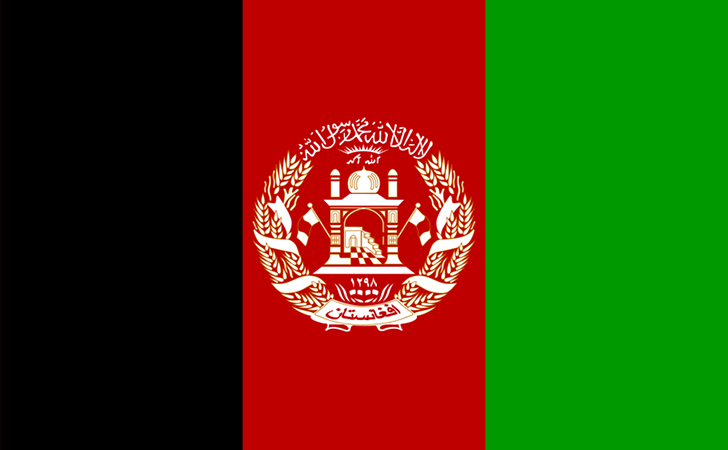 Afghanistan Flag, this nation has represented 22 different Afgan flags since the beginning of 20 th century. Describing about Afghan Flag, the Islamic Republic of Afghanistan embraced the current flag on January 4, 2004. The vertical stripes represent the past, bloodshed in the fight for independence and the Islamic faith. Although, the national Flag of Afghanistan has gone through various changes over the past centuries, however, mosque with its Mihrab offering prayers facing Mecca still persist. In past 28 years, the flag went through several changes, but the faith in Islam, the fight for truth and dignity is still can been seen in the stripes.it is one of the oldest flags that gone through numerous changes from past two centuries.

The first change in the flag that can be tracked in the history was in the year 1928. The introduction to a tricolor design, where black for the dark ages considering it past, red denoted bloodshed – fight for independence, and green for hope and wealth was symbolized. Between 1978 and 1992, a horizontal position and a new coat of arms were introduced in the flag. However, the flag reflected the regimes of ruling communist.

Again on December 3, 1992, the stripes contained green-white-black were coated with arms in gold. In this new design, the stripes emphasized on the religion’s values mentioned in Arabic inscriptions. The flag also featured a mosque with a prayer place and altar, sheaves of wheat, two flags, and two crossed sabers. An even more backward-looking Muslim group recognized as Taliban, unfortunately, controlled the rest of peaceful country and flown white flags inscribed with Arabic inscriptions. A new national constitution accepted in 2004, however, not yet propagated stipulates addition the inscription “God is great” in the Islamic calendar, the year Afghanistan got its real independence.

Afghani Flag features a tricolor and three vertical bands of black, red, and green. The black color portrays the distressing history of Afghanistan when the nation was ruled by the British Empire dating back to the 19th century. The red color depicts bloodshed and struggles for independence until 1919 (Anglo-Afghan Treaty). Lastly, the color green symbolizes prosperity and hope which is keeping the country alive. Interestingly, the Afghan flag is considered internationally among the five national flags to feature a building in its design.

Situated in the Asian continent Afghanistan is a non-coastal country that lies in the southern region of central Asia with approximately 31.6 million inhabitants. The country is surrounded by around six neighboring countries namely Turkistan to the northeast, Uzbekistan, Tajikistan, Pakistan to its southeast, China at northeast, and Iran at the western and southwestern region. With the population density of 49 people per square kilometer or 127 per square mile, having a land area about 652,237 km². The population density makes it the 150th most densely populated country in the world.

Afghanistan has a democratic Islamic republic, following Islamic Law guides capable of taking decisions of the executive, legislature, and judiciary. The official language of Afghanistan is Dari and Persian. The currency of Afghanistan is Afghan. Afghanistan comprises of two letter country code i.e. AF and its three-letter country code is AFG and in digits, it is 93. The calling code is +93 and the UTC i.e. standard time followed in Afghanistan is UTC+04:30. Being an Islamic republic, Afghanistan comprises a total of 34 provinces and 14 reputed cities namely Kabul, Kandahar, Herat, Mazar-i-Sharif, Kunduz, Jalalabad, Lashkar Gah, Taluqan, Puli Khumri, Khost, Ghazni, Sheberghan, Sari Pul, and Farah.